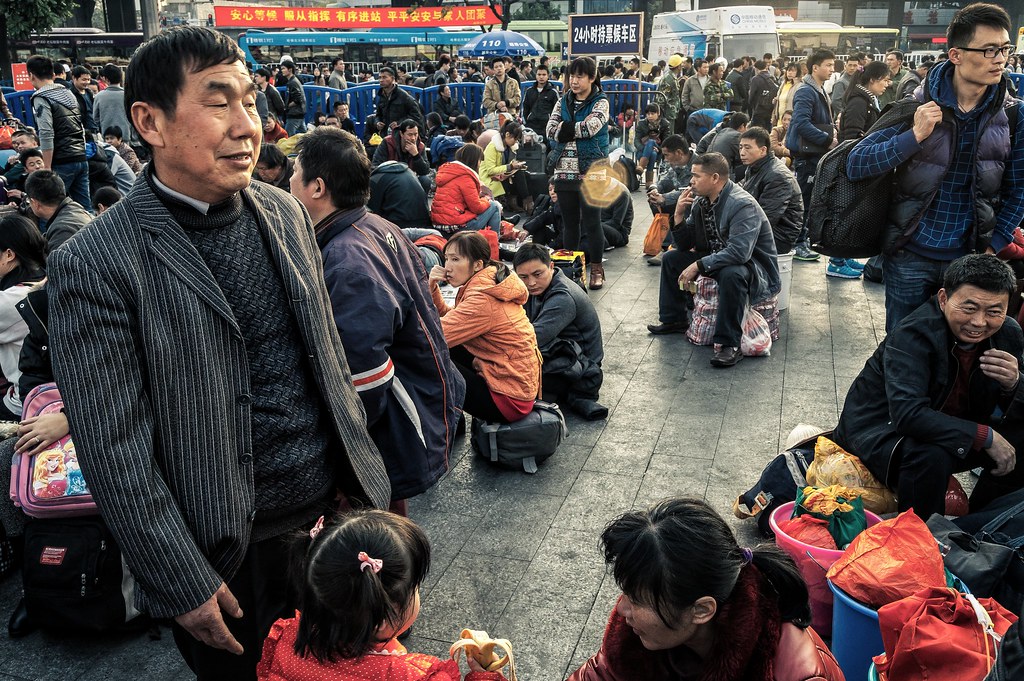 “人山人海 ” RenShanRenHai, or “People Mountain People Sea” is what the Chinese call a situation like this.

Chunyun (traditional Chinese: 春運; simplified Chinese: 春运; pinyin: Chūnyùn), also referred to as the Spring Festival travel season or the Chunyun period, is a period of travel in China with extremely high traffic load around the time of the Chinese New Year. The period usually begins 15 days before the Lunar New Year’s Day and lasts for around 40 days. The number of passenger journeys during the Chunyun period has exceeded the population of China, hitting over 2 billion in 2006. It has been called the largest annual human migration in the world. Rail transport experiences the biggest challenge during the period, and myriad social problems have emerged.

Three main factors are responsible for the heightened traffic load during the Chunyun period:

1) First, it is a long-held tradition for most Chinese people to reunite with their families during Chinese New Year. People return home from work or study to have Reunion dinner with their families on New Year’s Eve. Since the Chinese economic reforms of the late 1970s, new economic opportunities have emerged, often at a considerable distance from people’s hometowns. Places such as the Special Economic Zones and the wealthy coastal regions offer employment and often, a more sought-after lifestyle. Consequently, there has been a massive migration from rural to urban areas over the course of the last few decades, reminiscent of other industrial revolutions around the world. The number of these migrant workers was estimated at 50 million at 1990 and unofficially estimated at 150 million to 200 million in 2000. During the Chunyun period, many of these laborers return to their home towns.

2)Second, Chinese education reforms have increased the number of university students, who often study outside of their hometown. The Spring Festival holiday period falls around the same time frame as their winter break. Among the 194 million railway passengers of the 2006 Chunyun period were 6.95 million university students.

3) Finally, because the Spring Festival Period is among the two week-long holiday periods in the People’s Republic of China (the other being National Day, Oct 1), many people choose to travel for pleasure around this time. Tourism in mainland China is reaching record levels, further adding to the pressure on the transportation system.

These factors exacerbate current problems with China’s current inter-city transportation systems. The railway network is insufficient to handle the number of passengers, and does not reach enough places. The locations not serviced by rail must rely on bus transport, which faces problems such as inadequate equipment and road network.

The most affected modes of transportation are inter-city surface passenger transportation systems, namely railway and road networks. Most Chinese middle-class citizens cannot readily afford air transport. International, urban and waterway transportation are slightly affected. Until 2007, due to the high demand, the prices of tickets are increased during the period. In 2007’s Chunyun period (Feb 4-March 14), however, the government imposed strict regulations against inflated prices on railway tickets.

Because of the extremely long waiting period, many customers become frustrated and search for solutions to jump the line, often resulting in conflict. Fighting over places in line is often seen, and as people get closer to the ticket booth, much pushing and shoving ensues. The overworked ticket booth workers are generally frustrated with the repetitive and dull nature of their work, which, in most places in the country, come in long shifts every time, and therefore reflect a largely negative and frustrated image to the customers. Inquiries by customers are not always answered correctly or at all; customers are not offered many options to begin with, if time is allotted for indecision the customer is usually pushed aside by the next person in the line. The same problem is found with phone lines, which saves the anxiety of waiting in line, but are severely overloaded and the reception is often rude when a ticket agent finally picks up after several hours of waiting. In Shenzhen it is estimated that 23 days worth of tickets can be gone in a matter of 14 minutes if telephone was the only method employed. An internet system is present, but at times inadequate.

Due to the basic nature of Chinese railway tickets and the loosely set limitations on the number of “standing tickets” (which is basically a pass to get on a crowded railway car), Scalpers (piaofanzi 票贩子 or huangniu 黄牛, lit. yellow bull in Chinese) profit greatly during the Chunyun period. Organizations of scalpers have emerged, and the scalpers inside the sometimes intricate network work collectively to make the most gain out of the tickets. They pick up tickets in great numbers minutes after they go on sale, and then deal them out in and around the railway station at highly inflated prices. A significant problem has also emerged with the illegal dealing of tickets through obsolete ticket modification or even printing outright fake tickets using computer technology. Although measures have been put in place to prevent fake tickets, passengers who purchase the tickets become extremely frustrated when the authenticity of their tickets is questioned only upon arrival at the ticket validation officer, what would be minutes before boarding the train. Because of the worsening nature of the problem, the government has issued many warnings and began various campaigns to crack down on the scalpers. Unfortunately, because of the complicated nature of the problem and the social networks which surround the scalper organizations, police and other authorities who are supposed to be in charge of the crackdown often become involved in the illicit activity themselves, and take many bribes from the scalpers.

Severe snow storms in late January 2008 stranded many thousands of migrant workers as they attempted to get home. At one time over 100,000 people were at the main railway station in the southern city of Guangzhou.Around 1.3 million troops and reservists were drafted in around the country to clear blocked roads and rail lines to enable people to travel.