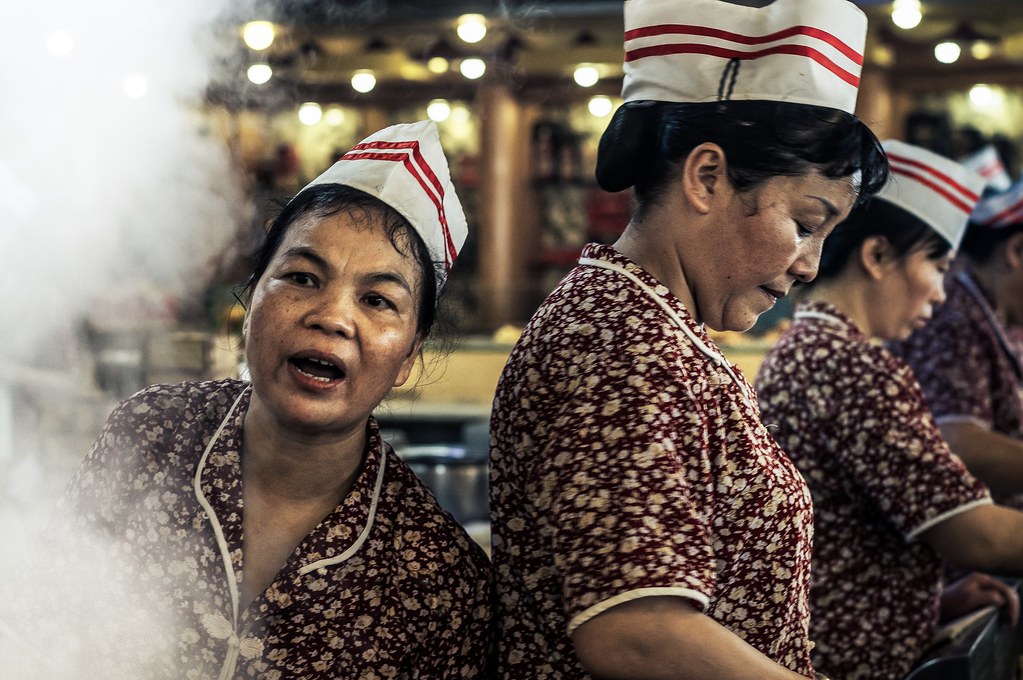 Dim sum refers to a style of Chinese food prepared as small bite-sized or individual portions of food traditionally served in small steamer baskets or on small plates.

Dim sum refers to a style of Chinese food prepared as small bite-sized or individual portions of food traditionally served in small steamer baskets or on small plates. Dim sum is also well known for the unique way it is served in some restaurants, whereby fully cooked and ready-to-serve dim sum dishes are carted around the restaurant for customers to choose their orders while seated at their tables.

Eating dim sum at a restaurant is usually known in Cantonese as going to “drink tea” (yum cha, 飲茶), as tea is typically served with dim sum.

Dim sum is usually linked with the older tradition from yum cha (tea tasting), which has its roots in travelers on the ancient Silk Road needing a place to rest. Thus teahouses were established along the roadside. Rural farmers, exhausted after working hard in the fields, would go to teahouses for a relaxing afternoon of tea. At first, it was considered inappropriate to combine tea with food, because people believed it would lead to excessive weight gain. People later discovered that tea can aid in digestion, so teahouse owners began adding various snacks.

The unique culinary art of dim sum originated with the Cantonese in southern China, who over the centuries transformed yum cha from a relaxing respite to a loud and happy dining experience. In Hong Kong, and in most cities and towns in Guangdong province, many restaurants start serving dim sum as early as five in the morning. It is a tradition for the elderly to gather to eat dim sum after morning exercises. For many in southern China, yum cha is treated as a weekend family day. More traditional dim sum restaurants typically serve dim sum until mid-afternoon. However, in modern society it has become common place for restaurants to serve dim sum at dinner time, various dim sum items are even sold as take-out for students and office workers on the go.

While dim sum (literally meaning: touch the heart) was originally not a main meal, only a snack, and therefore only meant to touch the heart, it is now a staple of Cantonese dining culture, especially in Hong Kong. Health officials have recently criticized the high amount of saturated fat and sodium in some dim sum dishes, warning that steamed dim sum should not automatically be assumed to be healthy.Health officials recommend balancing fatty dishes with boiled vegetables without sauce.

Dim sum can be cooked by steaming and frying, among other methods. The serving sizes are usually small and normally served as three or four pieces in one dish. It is customary to order family style, sharing dishes among all members of the dining party. Because of the small portions, people can try a wide variety of food.

There are common tea-drinking and eating practices or etiquette that Chinese people commonly recognize and use. These are practiced not only during dim sum meals but during other types of Chinese meals as well.

It is customary to pour tea for others before filling one’s own cup during a meal. When pouring tea for people on one’s left side, the right hand should be used to hold the teapot and vice versa. A common custom among the Cantonese is to thank the person pouring the tea by tapping the bent index finger (if you are single), or by tapping both the index and middle finger (if you are married), which symbolizes the gesture of bowing.

This custom is said to be analogous to the ritual of bowing to someone in appreciation. The origin of this gesture is described anecdotally: an unidentified Emperor went to yum cha with his friends, outside the palace; not wanting to attract attention to himself, the Emperor was disguised. While at yum cha, the Emperor poured his companion some tea, which was a great honor. The companion, not wanting to give away the Emperor’s identity in public by bowing, instead tapped his index and middle finger on the table as a sign of appreciation.

Given the number of times tea is poured in a meal, the tapping is a timesaver in loud restaurants or lively company, as an individual being served might be speaking to someone else or have food in their mouth. If a diner does not wish a refill being offered at that time, the fingers are used to “wave off” or politely decline more tea. This does not preclude taking more fresh hot tea at a later time during the meal.

Leaving the lid balanced on the side of the tea pot is a common way of attracting a server’s attention, and indicates a silent request that the tea pot be refilled.