Photo Documentary: The ancient octagonal village of Licha in Zhaoqing

Around 700 years ago, during the Ming dynasty, the BaGua (Ba=eight, Gua=symbol) village of LiCha was constructed in accordance with the Taoist cosmology to represent the fundamental principles of reality, seen as a range of eight interrelated concepts.

Although most houses have been deserted (I was told many of the citizens have moved to Australia), some houses are still in use and the local people seem to live quite a traditional life.

Applying feng shui using the Bagua of the eight aspirations made it possible to simplify feng shui and to bring it within the reach of everyone. The Masters of traditional feng shui call it Neo Feng Shui, for its simplicity, because it does not take into account the forms of the landscape or the temporal influence or the annual cycles. 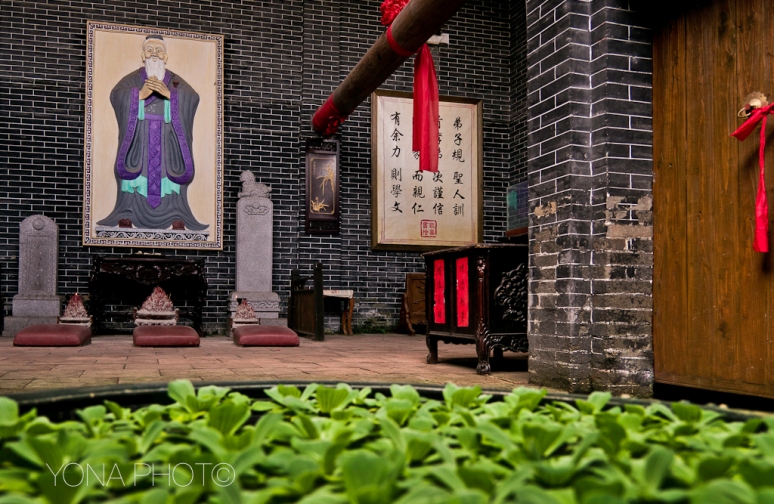 The grey bricks are used throughout the village, including the temple devoted to confucius.

Until about 20 years ago, the village of LiCha was still a busy and lively place. However, these days only few people remain, along with a couple of nesting swallows (which are said to be a sign of success in the future).

1) The bagua (Chinese: 八卦; pinyin: bāguà; Wade–Giles: pakua; Pe̍h-ōe-jī: pat-kòa; literally “eight symbols”) are eight trigrams used in Taoist cosmology to represent the fundamental principles of reality, seen as a range of eight interrelated concepts. Each consists of three lines, each line either “broken” or “unbroken,” representing yin or yang, respectively. Due to their tripartite structure, they are often referred to as “trigrams” in English.

The trigrams are related to taiji philosophy, taijiquan and the wu xing, or “five elements”. The relationships between the trigrams are represented in two arrangements, the Primordial (先天八卦), “Earlier Heaven” or “Fuxi” bagua (伏羲八卦), and the Manifested (後天八卦), “Later Heaven,”[2] or “King Wen” bagua. The trigrams have correspondences in astronomy, astrology, geography, geomancy, anatomy, the family, and elsewhere.

2) The ancient Chinese classic I Ching consists of the 64 possible pairs of trigrams (called “hexagrams”) and commentary on them. There are two possible sources of bagua: The first is from traditional Yin and Yang philosophy. The interrelationships of this philosophy has been attributed to Fuxi in the following way:

Another philosophical description of the source is the following, attributed to King Wen of Zhou Dynasty: “When the world began, there was heaven and earth. Heaven mated with the earth and gave birth to everything in the world. Heaven is Qian-gua, and the Earth is Kun-gua. The remaining six gua are their sons and daughters”.

3) A bagua map is a tool used in modern forms of feng shui to map a room or location and see how the different sections correspond to different aspects in one’s life. These sections are believed to relate to every area or aspect of life and are divided into such categories as fame, relationships/marriage, children/creativity, helpful people/travel, career, inner knowledge, family/ancestors/health, and wealth/blessings.

In this system, the map is intended to be used over the land, one’s home, office or desk to find areas lacking good chi, and to show where there are negative or missing spaces that may need rectifying or enhancing in life or the environment.

For example, if the bagua grid is placed over the entire house plan and it shows the toilet, bathroom, laundry, or kitchen in the wealth/blessings area it would be considered that the money coming into that particular environment would disappear very fast, as if to be ‘going down the drain.’