One bodhisattva, a thousand hands and infinite prayers 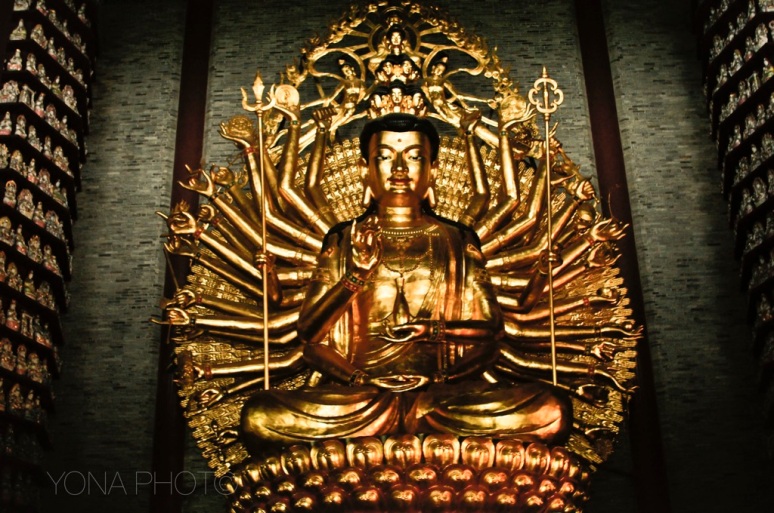 Guanyin is the bodhisattva associated with compassion

Guanyin is the bodhisattva associated with compassionas venerated by East AsianBuddhists, usually as a female. The name Guanyin is short for Guanshiyin, which means “Observing the Sounds (or Cries) of the World”. She is also sometimes referred to as Guanyin Pusa (simplified Chinese: 观音菩萨; traditional Chinese: 觀音菩薩; pinyin: Guānyīn Púsà; literally “Bodhisattva Guanyin”). Some Buddhists believe that when one of their adherents departs from this world, they are placed by Guanyin in the heart of a lotus, and then sent to the western pure land of Sukhāvatī.

It is generally accepted among East Asian adherents that Guanyin originated as the SanskritAvalokiteśvara (अवलोकितेश्वर). Commonly known in English as the Mercy Goddess or Goddess of Mercy, Guanyin is also revered by Chinese Taoists (or Daoists) as an Immortal. However, in folk traditions such as Chinese mythology, there are other stories about Guanyin’s origins that are outside Jatakas of Avalokiteśvara as recorded in Buddhist sutras.

One Buddhist legend from the Complete Tale of Guanyin and the Southern Seas (Chinese: 南海觀音全撰; pinyin: Nánhǎi Guānyīn Quánzhuàn) presents Guanyin as vowing to never rest until she had freed all sentient beings from the samsara or reincarnation. Despite strenuous effort, she realised that there were still many unhappy beings yet to be saved. After struggling to comprehend the needs of so many, her head split into eleven pieces. The buddha Amitabha, upon seeing her plight, gave her eleven heads to help her hear the cries of those who are suffering. Upon hearing these cries and comprehending them, Avalokitesvara attempted to reach out to all those who needed aid, but found that her two arms shattered into pieces. Once more, Amitabha came to her aid and appointed her a thousand arms to let her reach out to those in need. Many Himalayan versions of the tale include eight arms with which Avalokitesvara skillfully upholds the Dharma, each possessing its own particular implement, while more Chinese-specific versions give varying accounts of this number.

In China, it is said that fishermen used to pray to her to ensure safe voyages. The titles Guanyin of the Southern Ocean (南海觀音) and “Guanyin (of/on) the Island” stem from this tradition.