The boy and the world from the back of his cart 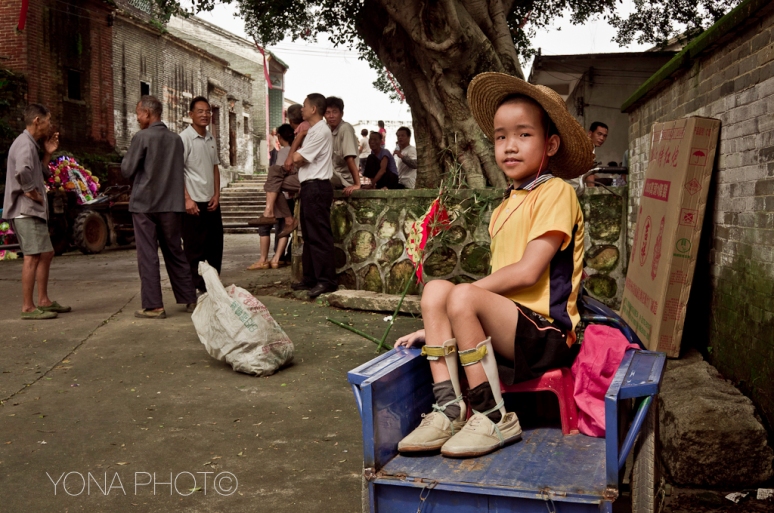 The boy greeted me with his smile from the back of his cart as his mom explained his legs were partially paralysed.

This information below is not related to the misfortune of the little boy in the picture, however, recent polio outbreaks in western provinces in China have caught my attention, hence a briefing on how and what.

Poliomyelitis, often called polio or infantile paralysis, is an acute, viral, infectious disease spread from person to person, primarily via the fecal-oral route. Although approximately 90% of polio infections cause no symptoms at all, affected individuals can exhibit a range of symptoms if the virus enters the blood stream. n about 1% of cases, the virus enters the central nervous system, preferentially infecting and destroying motor neurons, leading to muscle weakness and acute flaccid paralysis. Different types of paralysis may occur, depending on the nerves involved. Spinal polio is the most common form, characterized by asymmetric paralysis that most often involves the legs.

Although major polio epidemics were unknown before the late 19th century, polio was one of the most dreaded childhood diseases of the 20th century. Polio epidemics have crippled thousands of people, mostly young children; the disease has caused paralysis and death for much of human history. Polio had existed for thousands of years quietly as an endemicpathogen until the 1880s, when major epidemics began to occur in Europe; soon after, widespread epidemics appeared in the United States.

By 1910, much of the world experienced a dramatic increase in polio cases and epidemics became regular events, primarily in cities during the summer months. These epidemics — which left thousands of children and adults paralyzed — provided the impetus for a “Great Race” towards the development of a vaccine. Developed in the 1950s, polio vaccines have reduced the global number of polio cases per year from many hundreds of thousands to under a thousand today.

The first candidate polio vaccine, based on one serotype of a live but attenuated (weakened) virus, was developed by the virologistHilary Koprowski. Koprowski’s prototype vaccine was given to an eight-year-old boy on February 27, 1950. Subsequently, Albert Sabin developed another live, oral polio vaccine (OPV). It was produced by the repeated passage of the virus through nonhuman cells at subphysiological temperatures. The attenuated poliovirus in the Sabin vaccine replicates very efficiently in the gut, the primary site of wild poliovirus infection and replication, but the vaccine strain is unable to replicate efficiently within nervous system tissue. A single dose of Sabin’s oral polio vaccine produces immunity to all three poliovirus serotypes in about 50% of recipients. Three doses of live-attenuated OPV produce protective antibody to all three poliovirus types in more than 95% of recipients.Human trials of Sabin’s vaccine began in 1957, and in 1958 it was selected, in competition with the live vaccines of Koprowski and other researchers, by the US National Institutes of Health. Licensed in 1962,it rapidly became the only polio vaccine used worldwide.