Planet of the Sheep 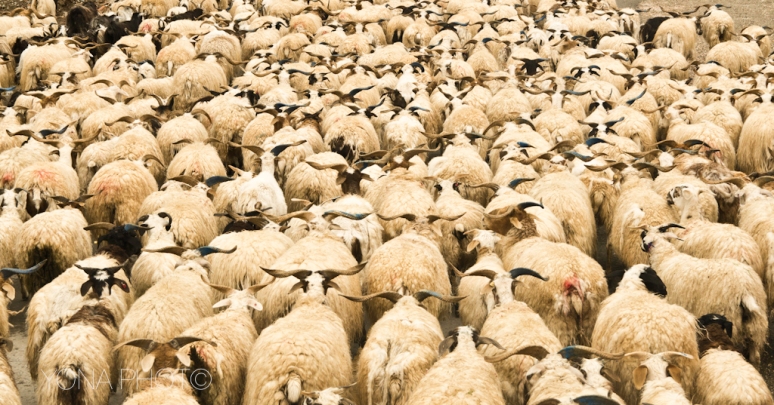 Flock dynamics in sheep are, as a rule, only exhibited in a group of four or more sheep….

Sheep (Ovis aries) are quadrupedal, ruminant mammals typically kept as livestock. Like all ruminants, sheep are members of the order Artiodactyla, the even-toed ungulates. Although the name “sheep” applies to many species in the genus Ovis, in everyday usage it almost always refers to Ovis aries. Numbering a little over one billion, domestic sheep are also the most numerous species of sheep.

Sheep are most likely descended from the wild mouflon of Europe and Asia. One of the earliest animals to be domesticated for agricultural purposes, sheep are raised for fleece, meat (lamb, hogget or mutton) and milk. A sheep’s wool is the most widely used animal fiber, and is usually harvested by shearing. Ovine meat is called lamb when from younger animals and mutton when from older ones. Sheep continue to be important for wool and meat today, and are also occasionally raised for pelts, as dairy animals, or as model organisms for science.

Flock dynamics in sheep are, as a rule, only exhibited in a group of four or more sheep. Fewer sheep may not react as normally expected when alone or with few other sheep. For sheep, the primary defense mechanism is simply to flee from danger when their flight zone is crossed. Secondly, cornered sheep may charge or threaten to do so through hoof stamping and aggressive posture. This is particularly true for ewes with newborn lambs.

Sheep are flock animals with a strong gregarious instinct, and much of sheep behavior can be understood in these terms. The dominance hierarchy of Ovis aries and its natural inclination to follow a leader to new pastures were the pivotal factors in it being one of the first domesticated livestock species. Furthermore, in contrast to the red deer and gazelle (two other species of ungulate of primary importance to meat production in prehistoric times), sheep do not defend territories but do form home ranges. All sheep have a tendency to congregate close to other members of a flock, although this behavior varies with breed. Farmers exploit this behavior to keep sheep together on unfenced pastures and to move them more easily. Shepherds may also use herding dogs in this effort, whose highly bred herding ability can assist in moving flocks. Sheep are also extremely food-oriented, and association of humans with regular feeding often results in sheep soliciting people for food. Those who are moving sheep may exploit this behavior by leading sheep with buckets of feed, rather than forcing their movements with herding.

The Difference between Sheep and Goats

Sheep and goats are closely related as both are in the subfamily Caprinae. However, they are separate species, so hybrids rarely occur, and are always infertile. A hybrid of a ewe and a buck (a male goat) is called a sheep-goat hybrid (only a single such animal has been confirmed), and is not to be confused with the genetic chimera called a geep. Visual differences between sheep and goats include the beard and divided upper lip of goats. Sheep tails also hang down, even when short or docked, while the short tails of goats are held upwards. Sheep breeds are also often naturally polled (either in both sexes or just in the female), while naturally polled goats are rare (though many are polled artificially). Males of the two species differ in that buck goats acquire a unique and strong odor during the rut, whereas rams do not.